Amazon recently dumped “Good Girls Revolt”, one of the best shows of the year and the most relevant in today’s atmosphere of “me too” and sexual harassment and predation.   And it was dumped by by an exec at Amazon who got run off for his sexual impropriety.  Fair?  No way.   I’m on the bandwagon to bring back this stellar show. 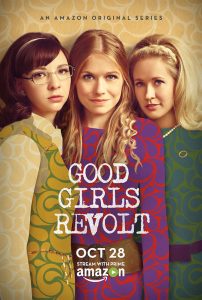 If you liked “Mad Men”‘s recreation of the 60s and 70s vibe you’ll love this show.  This show fully transports you to this era.  And the women.  The women!  They as gorgeous as you can imagine in this era (and I know as I grew up in this era).  They populate the ground floor of the newsroom while the men all work upstairs and get all the credit and write all the articles.   The women are “researchers” and coffee errand runners.

Did I say gorgeous?  Yes, Ann Camp, Erin Darke and Genevieve Angelson in the lead roles are awesome, especially Angelson who is the epitome of that era’s hippy free spirit.  We have a page dedicated to Good Girls Revolt which you can follow.

Ozark second best show of the year (after Good Girls Revolt)
Ozark: Their Last Resort. The Byrdes, husband and wife Marty (Jason Bateman) and Wendy (Laura Linney), their teenage kids Charlotte (Sofia Hublitz) and Jonah (Skylar Gaertner) — are for all intents and purposes an ordinary family. Ordinary save for Marty’s job: The top money launderer for the second largest drug cartel in Mexico. Now streaming, only on Netflix. Watch Ozark on Netflix:

Sense8 IMdb – Sense8 tells the story of eight strangers: Capheus, Sun, Nomi, Kala, Riley, Wolfgang, Lito and Will, each from a different culture and part of the world. When the eight suddenly experience a vision of the violent death of a woman called Angelica, they discover that they are “sensates”; otherwise normal humans linked with a mental and emotional connection, making them able to sense and communicate with each other, as well as share their knowledge, language and skills vardenafil india. While trying to live their lives and figure out how and why this connection has happened and what it means, they are aided by another sensate, Jonas, who is trying to protect them from a similarly empowered sensate called “Whispers”, who leads an organization that hunts down his own kind by tapping into their psychic link.

On our  “radar screen” for future reviews: